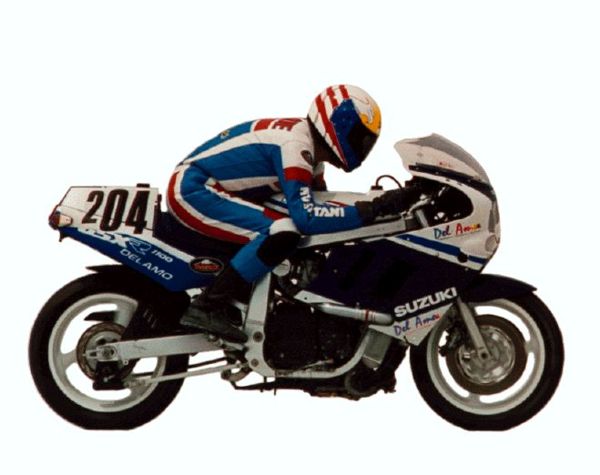 This is the one that started the modern turbo era. The first blow-thru carb, first intercooled, first 200 mph street motorcycle; the first fuel injected, 8 injector, individual throttle body system. Multiple 200 mph club records. Seems to have stirred up the best and worst in people. We had fuel-injected (Bosch) intercooled BMWs two years earlier but the shaft drive limited their box-stock top speed. The RB Racing Intercooled GSXR put Henry Louie into the double-two club i.e., 200 mph Bonneville and 200 mph El Mirage in the same year.! Henry went on to become president of the Southern California Timing Association Bonneville Nationals at the age of 67! 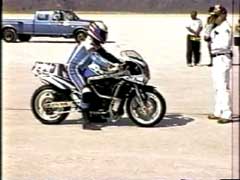 Stock engined Suzuki GSXR 1100 with an intercooled RB Racing turbo kit at Bonneville. Get an idea of what it's like to be on the line and go for record. 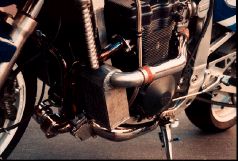 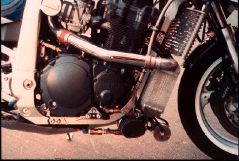 These GSXR's also put J.W. Winslet, Fred Wiley, and Rick Yacoucci into 200 mph clubs. All of these records with over 1000 miles of 1.3 miles (El Mirage) 6 miles (Bonneville) of high boost were achieved with 100% engine reliability.

What people won't do for their 15 minutes

Certain people like Dennis Desmet and Mark Moisan used our technology to win Hp Shoot-Out Contests at Daytona, but never set any records. Dennis beat the shit out of our parts, changed turbos and got pissed off when we wouldn't advertise his multiple Daytona wins. Mark Moisan bugged us for over a year to get tech data, borrowed one of our kits from a butchered installation, copied our parts and even bugged Henry Louie for information. Mark eventually succeeded and tried to cause as much verbal trouble for our firm as possible even though he never bought anything. We even had to call Mark up at home to remind him that in as much as he had never bought anything from us he had no reason to go about trying to cause trouble for RB Racing. Shit, he could have saved a lot of time if he had just bought one of the kits, then he wouldn't have had to use an electric scavenge pump for the turbo. Mark pleaded poverty in our dealings with him but later admitted he had the money, he just wanted the technology. We have a file folder of our dealings with Mark that we'll auction off to the highest bidder and even throw in the labels on the fruit baskets he sent us to sweet talk info out of us. Scum. Dyno queens. Life is too short for this shit, Mark now gets to deal with people like himself. Update: Mark Moisan seems to be out of the turbo business these days....Guess it didn't work out or prove to be easy or profitable.

Rick Yacoucci stuffed a GSXR1100 into a 750 frame and went on to set a bunch El Mirage and Bonneville 200 mph records. He also won a lot of Horsepower shoot out contests with the GSXR. As we don't make GSXR Hybrid Kits we had to redo Rick's kit to fit. He neglected to tell us about it. After giving Rick lots of additional free upgrades, free breather/blow-off valves, and after hours upon hours of phone calls and unannounced visits Rick got his shit together (two years later) and went 1 mph faster that Henry Louie had done 8 years earlier and got his records. At one point Rick spent a lot of time verbally threatening and insulting us because we would not give him something he had not paid for, and something that had not been tested. We gave him the prototype part on the condition that he never talk to us again. Two weeks later he called again and we asked him if he understood the definition of the word "never". People will do anything to get what they want. No one listens. It's a me, me, me, world.

After he got into the 200 mph club (two times: once unfaired, once faired) at El Mirage he seemed to forget about us as we never seemed to get mentioned in his web side. Funny, but that's the way it always seems to be...you can't do it without the parts but as soon as you do it you thank everyone in the world except for the turbo/efi supplier.

Rick used to do swimming pool maintenance for a living and has never made a turbo system in his life but since he got his records he is now Turbo Rick giving advice to the world. A little knowledge is dangerous particularly when you believe your own bullshit. These days Rick has continued to ride in speed contests for other people and makes a living managing pornographic servers and editing their content.

Update 2004: A long term acquaintance of ours showed up with a RSR ECU that he bought at a swap meet for next to nothing along with an eight injector wiring harness. The ecu and wiring harness had a lot of dust from El Mirage/Palmdale...something we are very familiar with. It seems Rick tried to remove a chip that we left accessible for system upgrades... Perhaps trying to "read" it (you can't) and he apparently killed it with ESD (electro-static discharge) rendering it a "dead puppy". We put in an upgrade chip and the ECU worked perfectly on our flow bench. We know it was Rick's ECU because we embed info into the electronics that the customer cannot access. When you get a big head and burn your bridges that others helped you build...Well, as they say "What goes around comes around". Rick could not come back to us for assistance after some things he said. The ECU is now back to business on some other project bike. Tough stuff.

Rick got off the bikes..never doing anything important after setting records with our equipment. He now drives cars in speed contests. We see him at Bonneville but he had better not try to talk to us or he'll get decked. We're serious about "never". 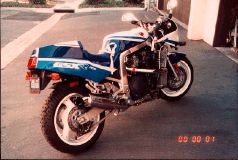 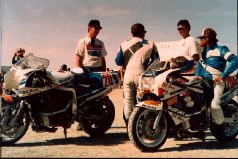 GSXR's are tough--Keep the RPM below 11,000, use water injection above 10 psi. Don't put any trick ignitions on them. Run 35 degrees full advance drop you spark gap to.019", use NGK Race plugs, and you can get 272-350 hp. About 18 psi and 272 hp @ 10,000 rpm is enough to do anything. No one believes us but we do not recommend boring the motors, big blocks or Carrillo rods. If you over-rev them past the stock redline you will sooner or later crack the crankshaft. Stay with Suzuki's internal balance factors, they did a better job than you will. These are violent, sudden toys that get your attention fast...and will get you if you don't pay attention.

Henry Louie had everybody in the world race his bikes with about zero maintenance after we stopped our full time support of his record attempts. No one got hurt and a lot of people got their competition licenses. At one point Henry had the fastest bike of the meet in 27 contests. You have to carefully maintain the GSXR if you want to play with the big dogs, just ask Henry or Rick.

Click on the title above to go to our RSR Boost Compression Ratio Calculator. This allows you to run scenarios of how boost affects your effective compression ratio as modified by altitude considerations. It will give you a good idea as to why turbos go so fast and also how to plan your motor for your particular circumstances. Knowledge is power.

A long time ago in a galaxy far far away

We don't make these any more so don't ask. In as much as the kit was actually designed in 1987 (we used a Canadian 750 with a GSXR1100 motor and 6 speed trans) we would do it a bit differently now, with higher output turbos and our dual computer fuel strategy...but it's all ancient history now. Several people like Rick and Henry have asked us to redo their GSXR to designs more like our ZX-11s but no one wants to pay for it...or they want free parts so they can do it themselves. Go figure. Please remember these were designed in 1987-1988 and like Dr. Martin Luther King we have already been to the mountain and seen the promised land The blow thru carb kits were sold for $4,500.00 and the EFI kits were sold for $6,500.00.

No we don't sell 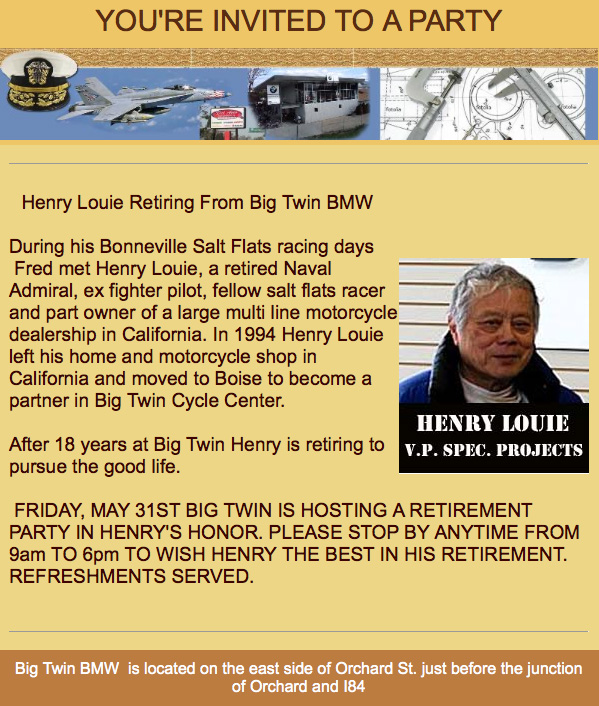 We met Henry Louie via Luftmeister whom we had helped to secure a 200 mph El Mirage record on a BMW. We ended up turbocharging two Suzuki GSXR turbos for Henry..one which he paid for and one which he did not...so we repoed the second turbo kit. During the time we were around Henry he claimed to be a have been Naval fighter pilot. He also claimed to have his personal F4 Phantom Jet which he flew to St Louis for lunch. He also claimed to be a Korean War veteran flying jet aircraft in that conflict "going eyeball to eyeball with the enemy pilots". He also claimed to have flown the reconnaissance missions over the Bridge at Toko Ri, as seen in archival footage.. When mentioned we had been in Viet Nam in Military Intelligence Henry said he had been in Laos and Cambodia on special electronic warfare sensor projects. For his Harley acquaintances in Boise he also claimed to have been a Harley racer and District Champion in the late 1940's.

Henry, at various times, claimed to have climbed Mt Everest, been a marathon champion and, no matter what subject you brought up he had done it either better, way before you, or he had things which were more expensive or better than anything you had.

We shepherded him into the double two club at Bonneville and El Mirage in his first year of competition, which is pretty much unheard of. We went with him the the SCTA Bonneville awards dinner where he got his double 200 mph recognition and jackets and he did not once mention RB Racing. Henry had to be guided...He could not even remember to turn on his fuel petcock or keep his gas tank full at Bonneville...He was too busy walking around in his Kushitani leathers playing politics and telling stories about himself. Henry wrangled himself to become the President of the SCTA...mostly based on his speed records and his donations of jackets and other items.

Henry ended up selling his Suzuki Dealership (Del Amo Motorsports) and moved to Boise to partner in Big Twin BMW. At his retirement we found out he claimed to have been an admiral. Now if you had risen through the Officer ranks in the Army like we had and our friends had..the claim that Henry had been an Admiral was a bit too much to take so we decided to make some checks. Admirals are North of Naval Captains and Army Colonels. We always knew he was a liar but we wanted to check.

We contacted The Fake Warrior Project and they found no service records whatsoever for Henry Ensign Louie. Our Harley friends at Brother Speed in Boise could find no records anywhere of Henry ever racing Harleys in the late 1940's.

Stolen Valor is a crime these days. Henry is now in his mid to late 80's, blind from cataracts and in a rest home in Salt Lake City where he preaches his stories to the staff and residents of his nursing home.

Addendum: Henry passed away with his lies intact in 2017. Some documents uncovered later showed he was a drafted and possibly served as a Corporal in the Army for 1 year and 11 months in 1949-1950...No Navy, No Admiral..just Lies.