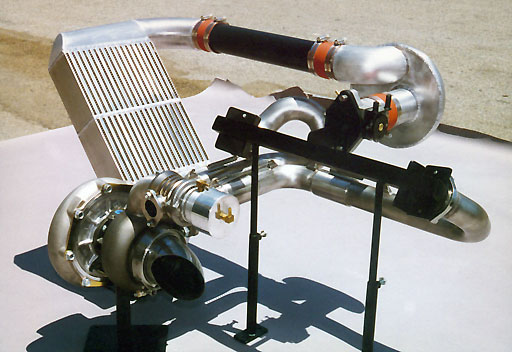 Lots of boost. Lots of horsepower. Lots of billet parts. Lots of money. Like they say if you want to make a million dollars racing Harleys start out with at least two million...if you quit soon enough you just might have a million left. However we aren't millionaires because millionaires don't look at this stuff...They are off on their yacht sucking down cool ones with tight thises and thats parading around. For the rest of us heroes we make these sort of things so we can get trophies, records and look at girls on the wall with staples in their midsections. Ain't glory fun. Try and figure it out, there are reasons for it's design and not one of them has to do with going slow.

These systems are quoted on an individual basis. We suggest you have a budget in mind before you call asking for details. Specialized racing turbos can cost a lot of money and you aren't going to "junkyard" your way to victory. If you are not prepared to order a complete system including spares then don't plan on going racing. We have spent months talking to people who are planning things, who don't even have their motors or even a chassis...this is not something we wish to keep doing. If you are dealing with certain engine suppliers we won't even talk to you because we have wasted the large part of a year talking to people who gave their money to "Billet Cylinder Head/ engine suppliers" that took 18 months to two years to deliver the parts...we aren't going down that road again. If you aren't ready to roll then don't call till you are ready. If you are ready, then we can help.