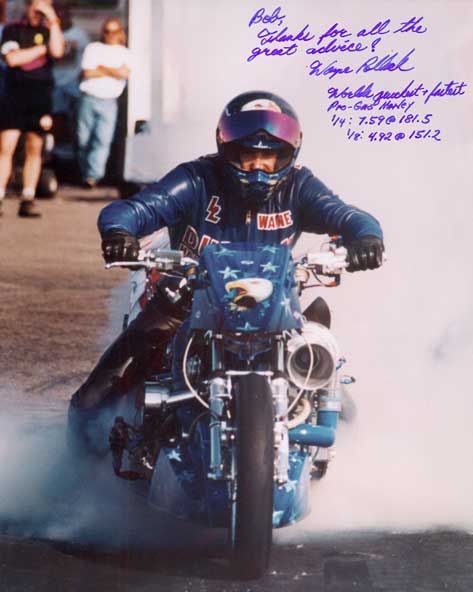 Wayne Pollack former National Modified Champion on the Majestic Turbo Harley: methanol powered, Hilborn injected, Nitrous Oxide assisted, 160 cubic inch billet McClure motor, B&J transmission, huge turbo, 14" slick. One complicated mother to dial-in. RB Racing stays out of the methanol and nitro arena as it has taken decades to get control over gasloine / electronic fuel injection. We built a Pro Gas (gasoline) setup for Wayne but he had to hand the project off when certain sponsors changed their plans. Wayne wanted to race "now" so he went to Majestic Turbo to ride this beast. Here's Wayne doing what he loves best, racing.

Wayne inherited a dual turbo, non-working, contraption when he arrived in Texas. We told him the twin turbo deal was the wrong approach...In fact the bike barely had made it down the 1/4 mile. We gave Wayne the turbo specs and design criteria from our original Pro Gas design to redo the bike so it had a chance. After one episode of poor fabrication by another turbo outfit, Wayne called us up again and we told him both the best way and the cheaper, more practical, way to redo the setup. He chose the practical way and redid the plumbing himself. After wrestling with the Majestic Turbo bike trying to build, sort, tune, ride and develop things, all pretty much on his own,..plus the internal Team politics, Wayne split and went back to North Carolina to get a real job working in a GE Jet Engine facility. This was a smart move because he had dual cornea surgery covered by his new employer.

We stayed in touch with Wayne for a long time afterwards as we enjoy people who like to win...and we do remember that Wayne gave our ideas a good shot. These days Wayne rides in speed contests back East with Scott Guthrie and others and we don't hear from him as much. Life moves on. For us it's 24/7. Eyeball to eyeball. It's good to reflect on history and the people you meet. For us it's.."If you can't tune, or engineer, you squeeze the juice".