Beware Those Full of Smiles and Promises

Nigel called us twice for exhausts. First ,when he started to make cylinder heads,we loaned him an unfinished 2-1 Softail Style "C" LSR 2-1 to use on his bike. He said his cylinder fins were fatter than stock so the pipe would't fit. Then he called and asked for pipes to take pictures of, to test and to sell as he kept hearing the RB pipes were doing well in dyno tests and having just been to Daytona numerous people had told him they were getting RB Racing exhausts.. We loaned him three pipes, and a RSR Air Fuel Ratio Gauge for his Softail and never heard a word from him.

After four months we called him and he said he had problems with his motors and couldn't make more than 110 hp whether he used our pipe, a Vance and Hines Pro Pipe, a Thunderheader or a White Brothers "E" pipe... He said the problem was "obviously in his head design". We should have taken a clue from this instead of wishing him luck in straightening out his billet head and camshaft problems. I guess we should also have paid attention to all the other pipes we saw laying about his shop. It wouldn't have taken a genius to figure out he wasn't going to sell our pipes at that point. Four more months went by and we still hadn't heard anything so we called and were told we would be sent some dyno sheets which never appeared.

Almost a year passed, Daytona was coming up again and we decided to drop by for a visit on a Saturday to see where our pipes were and why no contact, not even one phone call, was ever made. Guess what we found...one Nigel Patrick and a quasi-copy of our pipe on Nigel's Softail bike. Actually, it more like if you copied our tail section and stole some other features from Vance and Hines and the White Brothers.

We told Nigel that at least he didn't copy our labels, even though it sure looked like our designs on first glance. We gave him one final free bit of advice about the pipe business telling him everyone's heels would melt on his rear pipe the way it was designed. Nigel said we shouldn't be upset because "There is room for everyone in the market...and he really didn't copy our parts exactly". We told him there wasn't room for certain people on this planet, but if he would just return our parts we would get on our way...to which he responded that he couldn't because he had given our parts to customers of his.

We contacted Nigel to see when payment or parts would be coming. His response was he wasn't going to pay for or return anything and that he had "tried to order parts from us but we did nothing". We asked him what our address, phone number, e-mail, fax number, or website url was....he had no answer. Nigel's tactics, when he is caught, is to try to place blame on the other person. Here's a few we have heard:

1. "Your parts were made wrong because you rushed us." Industry veteran.

2. " The people you had flow test my heads you say don't work are liars because they want to sell you porting work". They didn't work or flow as well as a set of stock S&S parts that were used before.

3. "Your parts were finished but we made a mistake and we have to do them again". Never were started one year later.

4. "They work fine it's something you did" $1,900.00 set of polished carbs don't work...went back on the garage shelf to be replaced by a single carb that actually worked.

To make a long sorrid story short it took us nearly another six months to get back all the beat up and cut up parts back. He refused to either return or pay for the parts and came up with some convoluted logic that had us asking him if he really believed his bullshit or maybe we could do him a service and yank him out of the Twilight Zone where he lived. Man, we've seen them all and we have had our parts ripped and copied but at least some of those people paid for the privilege. 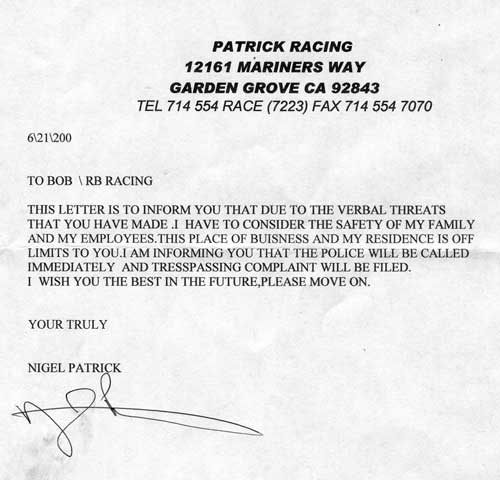 When Nigel sent us the last of our cut-up and beat-up parts back after nearly eighteen months, minus hardware and with wiring sliced in half, with this note was tucked in the box. I guess if you can't deal straight up with other businesses, pay your bills, or return merchandise that is not yours, you call the Bobbies. Maybe Nigel paid for the other pipes we saw at his shop...I'm sure we were the only one nice enough to stop what we were doing to help him out. Oh yeah, then there was the time we spent 12 hours building him a Pro Stock pipe for his Suzuki that we never even got a thank you for...but that's another story. Beware those full of smiles, sincerity and promises.

In the end he gave up on exhausts...

Then there was the time we got involved with National Champion drag racet Wayne Pollack who had ordered a set of heads for a 4 cam Delkron case that we were supplying a Pro Gas turbo system for. Took Nigel something like a year or more to cough up the heads during which time Wayne lost his crew and his sponsorships (save us). We made three trips to Nigel's shop and got excuse after excuse and found Nigel took the money from Wayne but had made nothing. Eventually, more than a year later the heads (incorrectly set up) were sent. Wayne abandoned the project and embarked on a career riding other people's bikes...and then off to work at a GE jet engine facility...all due to the delay by Nigel. Wayne donated the turbo we made to Ken Browne who won the Pro Gas Championship with it in the first year.

Then there was the time way back in 1989 we tried to convince Nigel to start working on Harley heads instead of Suzukis. We had a bike down for four months waiting for him to port the heads. Once installed they dropped a valve guide and lunched the cylinder on turbocharged FLH. All we heard from Nigel was him whining about how much it cost him to pay a guy to do the porting.

Russ Collins was kind enough in the 1980's to give Nigel a job at RC Engineering. Russ had a funny story about Nigel and a movie that was made by Peter Starr called "Take it to the Limit". Russ kicking Nigel's ass at the drag strip. Nigel left RC Engineering in a huff after saying Russ was given a faster stock bike to go out on his own.

Probably safe to say we went to bat too many times for Nigel. You always assume the other person who is full of smiles has some good intent in his heart. It turns out Nigel was playing Cricket and we were playing baseball. Now we play hardball. It's the American way.

Nigel moved on to Arizona where he machines billet parts for people's shiny toys. All by himself...employees are too expensive. If you are in the market for a non-proven, non-competitive, inferior, polished motor for your show bike Nigel is your guy. He charges you and extra $5,000.00 for an inferior set of billet cylinders (no cast-in sleeves) and a set of billet heads that are inferior to S&S cast and heat-treated parts in terms of flow and heat dissipation. Cast parts can have complexity that machined parts do not.

We suggest you stick with S&S as Nigel won't warranty anything. You know it's your fault...wrong oil, etc. when things go South. "Park and Talk" items as we say.