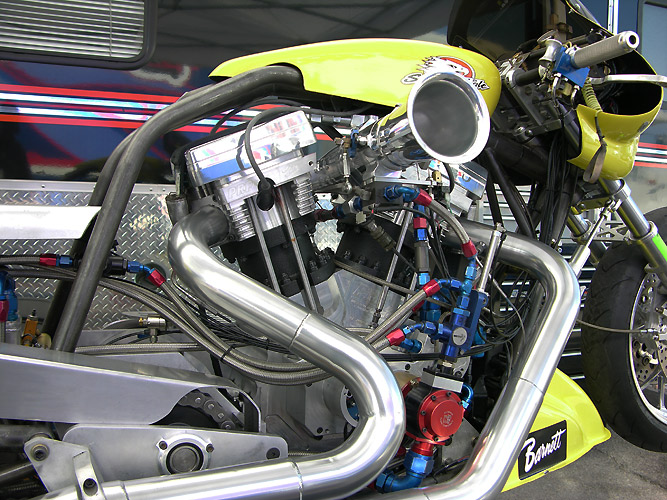 Carl Pelletier's Competition Motorcycles Top Fueler of Boise Idaho: Back in Las Vegas for the 2011 NHRA Lucas Oil Division Finals. Just like in 2010, West Coast AHDRA events are about non-existent in today's economy so, if you want to race and you're on the West Coast, it's about 5,000 miles of driving before you get to the place where you can blow up your toy in search of a small purse. Less people are willing to do this. No Pomona, no Las Vegas, no Bakersfield...only Arizona and Woodburn.

No points, no championship...Just an chance to show the NHRA crowd how exciting a 200 mph motorcycle riding on one wheel with no roll bar can be. A bonus for the motorcycle racers is that the event is well-run, the track is well prepared because of all the NHRA four-wheeled crowd, and there is adequate professional safety and ambulance personnel at the track. Bike events like the AHDRA simply don't have the financial clout to put on a big show. Add Nitro bikes to the mix and hopefully, like the Pro Stock segment, more resources will become available. 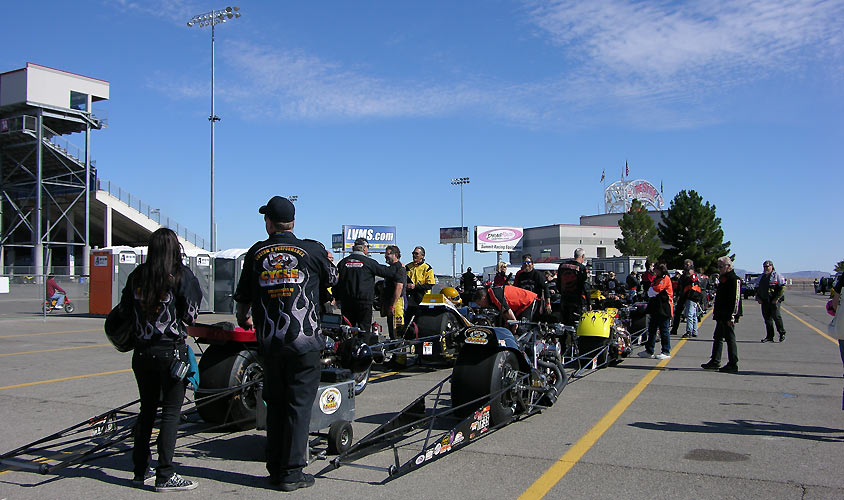 14 Top Fuel bikes showed up for the event to put on a show for the crowd. Weather was clear and cold with storms looming. 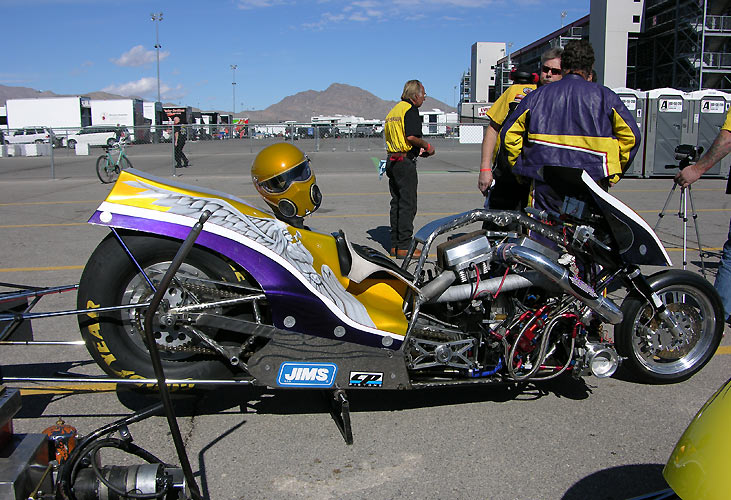 Only one of the bikes was supercharged. The exhaust pipes are routed under the seat and point upward. A helmet is perched atop the exhaust "zoomies". Bob Grime's bike. 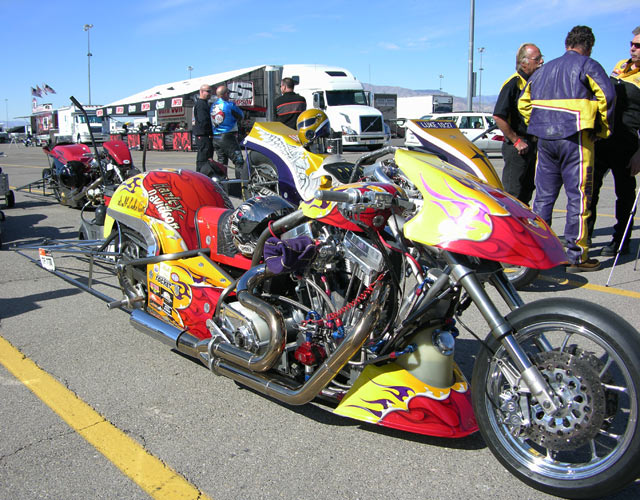 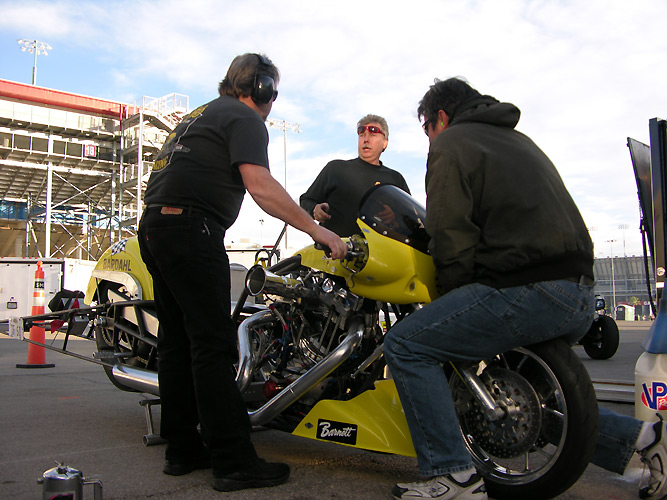 Carl, Steve and George warm up the Fueler in the pits to check the motor and clutch out on Thursday prior to making one test pass Thursday evening. George has to hold the bike down by sitting on the front tire because, when Steve whacks the throttle, the torque from the 175" motor will rotate the bike off its stand and off goes the bike without a rider. 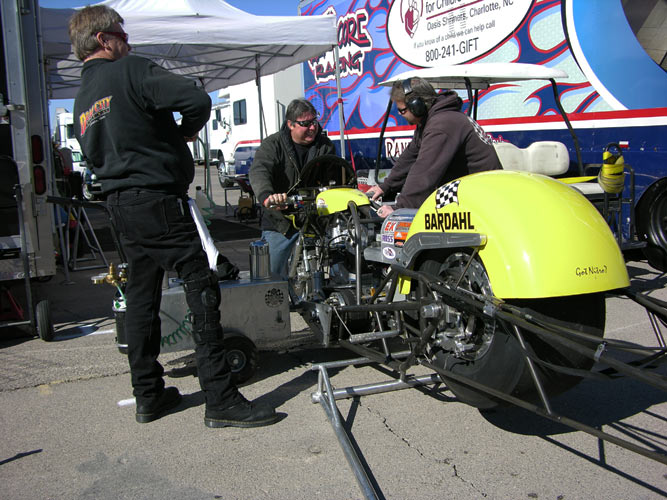 Starter cart, race bike on the lift, methanol squirt can to prime engine, earplugs and ear protectors. Make a mistake of not clearing the cylinders by removing the spark plugs and you have just created a bomb the next time the engine turns over. 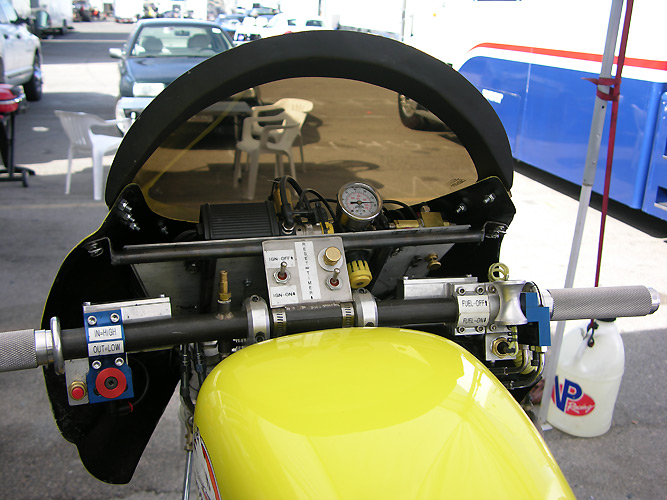 Steve Heidner's office. He doesn't stay in the office much...usually about 6 to 7 seconds. Two red buttons to the left are the shift button for the two speed transmission and the parachute. The parachute settles the bike down and the rider has to cut power (throttle) and use the front and rear brakes to stop 1000 to 1200 lbs of bike and rider from running off the end of the track. 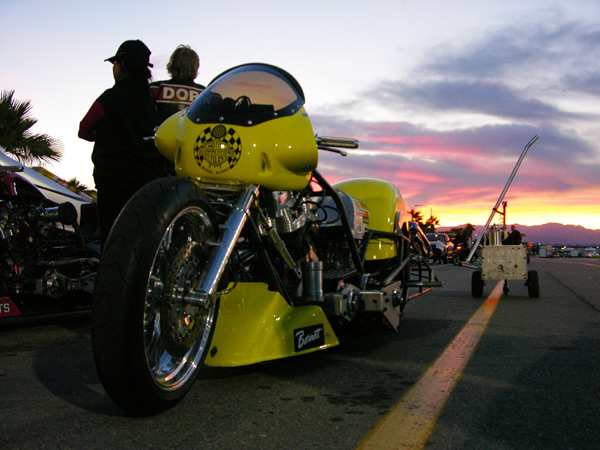 Las Vegas in the early evening in the staging area. First the alcohol funny cars then the 14 Nitro bikes. 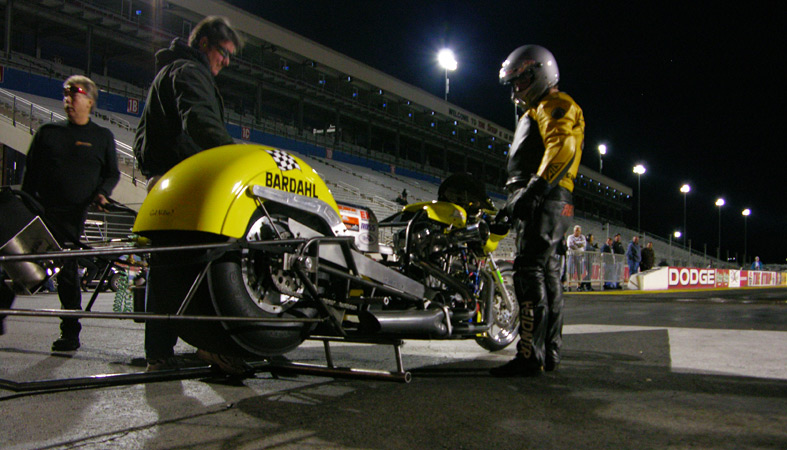 Steve makes an easy 7.10 pass @ 188 mph. The clutch wasn't hooked up completely and the bike needed more fuel in the cool dry Las Vegas air. Carl mans the battery/starter cart. Steve squirts Methanol into the engine to start the bike and George "spots" or lines up Steve for his test pass. Next is the long wait for qualifying. 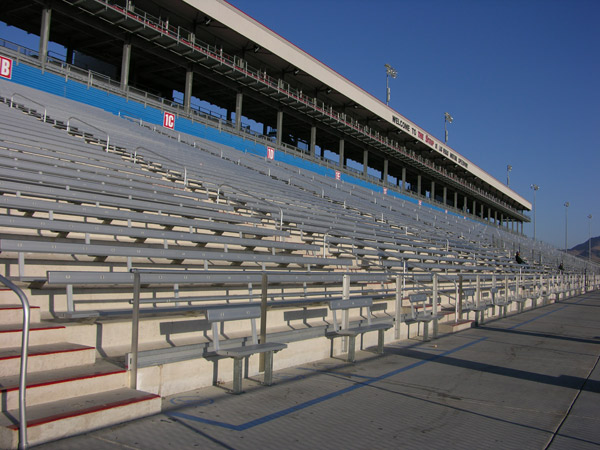 Here it is Friday morning and the cars are running. The stands are packed with spectators. Not. 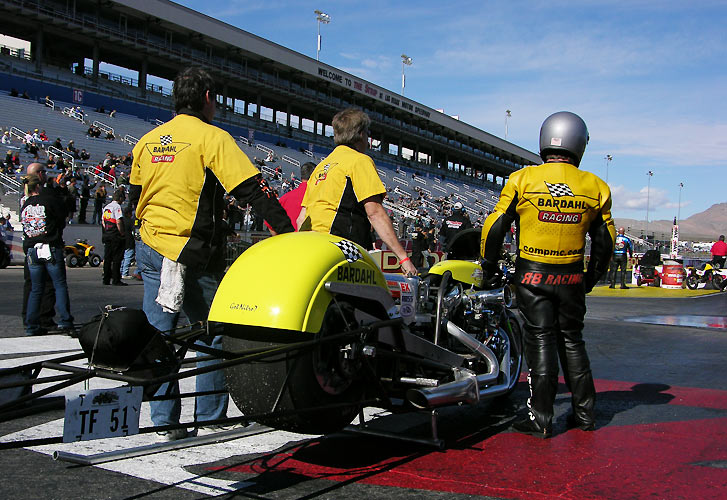 Steve puts down a solid 208 mph pass in 7 seconds. Based on the data recording, decisions were made to add clutch and fuel for qualifying. 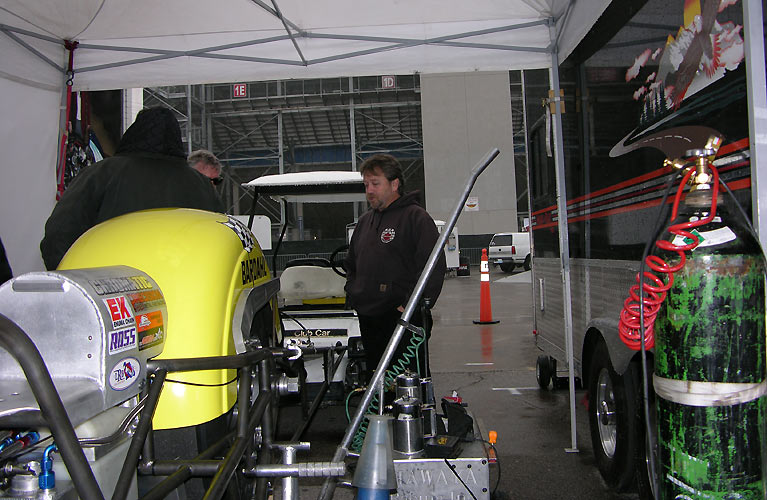 The rain came and the temperatures dropped so the races were put on hold until  Saturday. Button up the canopy. If you've been at this long enough you are prepared for rain and wind. Time to review things. Other competitors stop by looking for spare parts that they broke. Bench racing begins in earnest with information on clutch setups, fuel delivery and tech gossip. It's a small rarefied world of Top Fuel. If you don't help you might not have someone to race against. 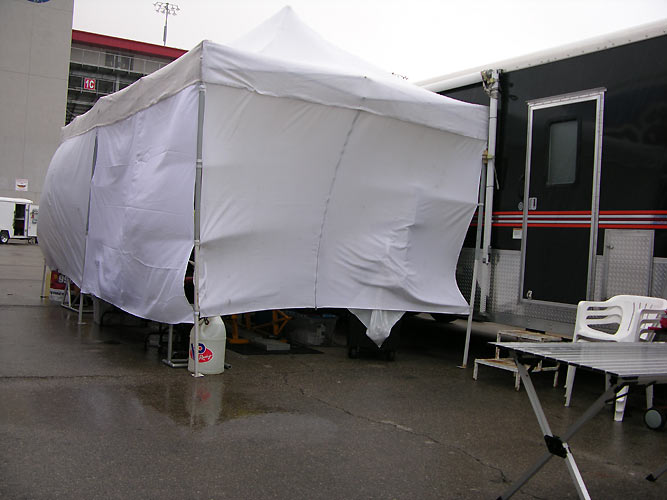 Strong winds and dropping temperatures and rain put everyone on the trailer. 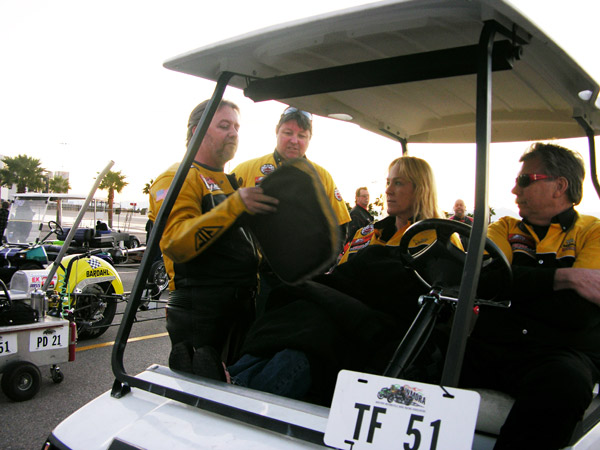 You wait in the staging area and get to discuss titanium chest protectors, the weather, gossip, Chuck Norris one liners, and chill out in the Las Vegas Wintery air. Golf carts are the norm for towing top fuel bikes about. Steve, George, Susie, and Carl in Bardahl yellow and black. 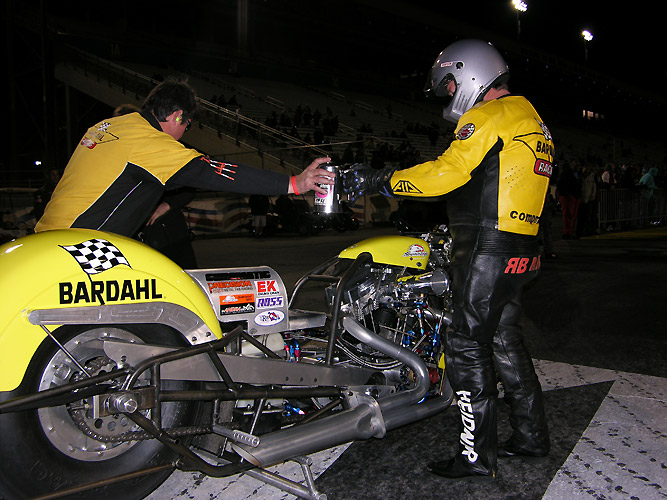 Pass the Methanol. George passes the methanol engine priming squirt can to Steve Heidner. Steve placed the Competition Motorcycle's Fueler in 8th position on the qualifying ladder for Sunday's event. 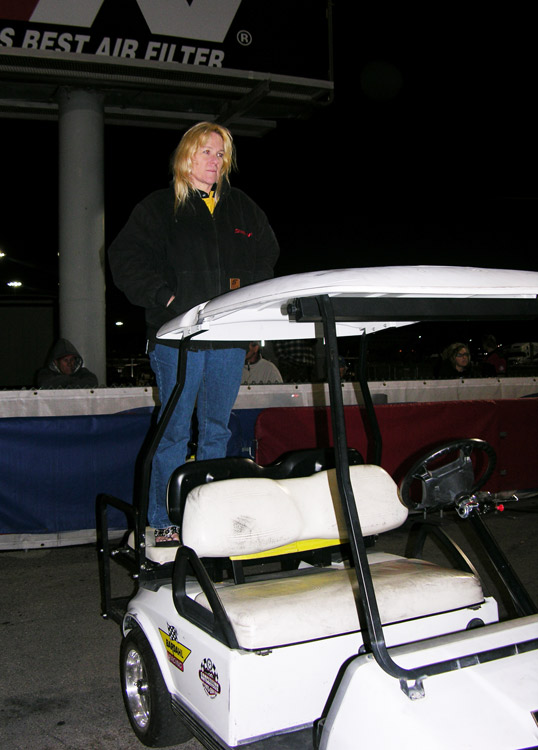 In case you haven't reflected on how serious a sport this is...200+ mph at night on a windy track, riding on the rear wheel, laying on top of an 800 hp bomb, and pretty much out of control...look at Susie. She's seen Steve do this before and it never gets any less serious. 10 minutes later we're back in the pits, Steve laughing about the bike headed for the concrete divider with the front wheel in the air and how he put the wheel down and it still went for the wall and how he got out of it and still qualified eighth. Balls.

Headed for First Round Eliminations 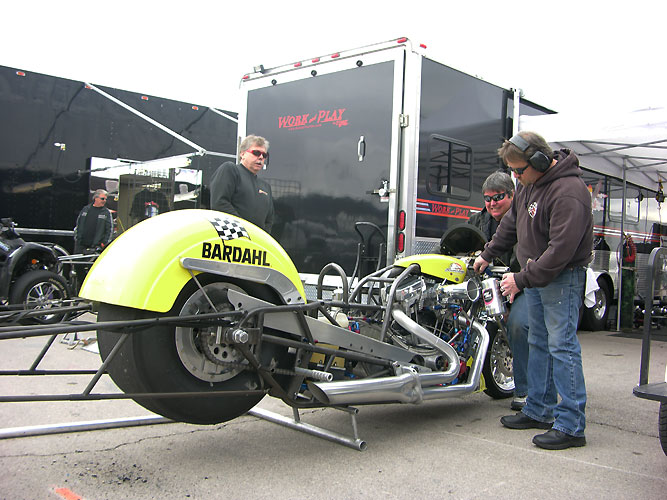 Use methanol to start the bike and check the clutch engagement and idle settings. The motor has fresh oil and spark plugs. George will have to verify tire pressures just before Steve runs. After the bike warms up the cylinders have to be purged of any nitro...The spark plugs are removed and Carl cranks the engine over while George holds the throttle open. 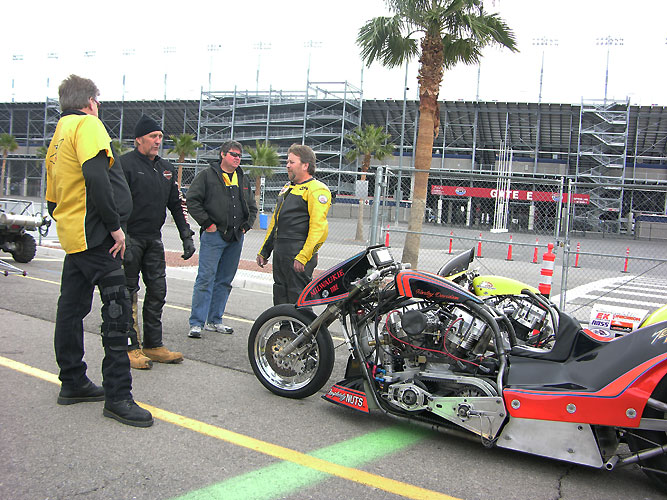 Steve Heidner and Steve Dorn are headed for the first round of eliminations...Steve v. Steve. Everyone wants to win but it's a friendly rivalry. A small rarefied world of Top Fuel Harley drag racing. You have to have confidence in the next guy when you're going side by side at 200 mph on one wheel. 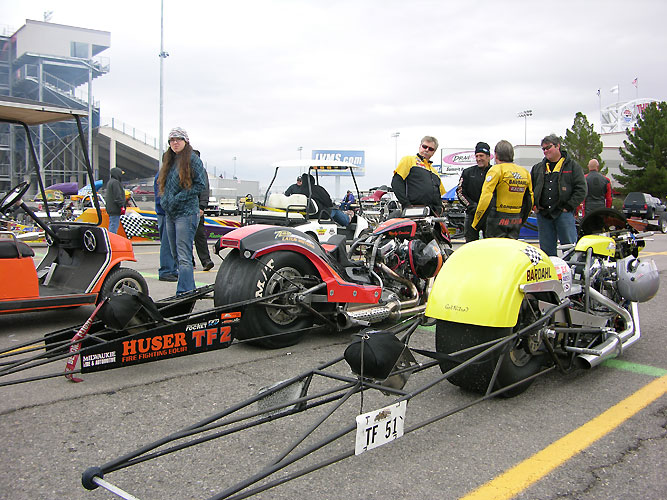 Cold weather and a "tight" track is a new tuning equation for both Steve's. No one knows what is going to happen until they both pull the trigger. 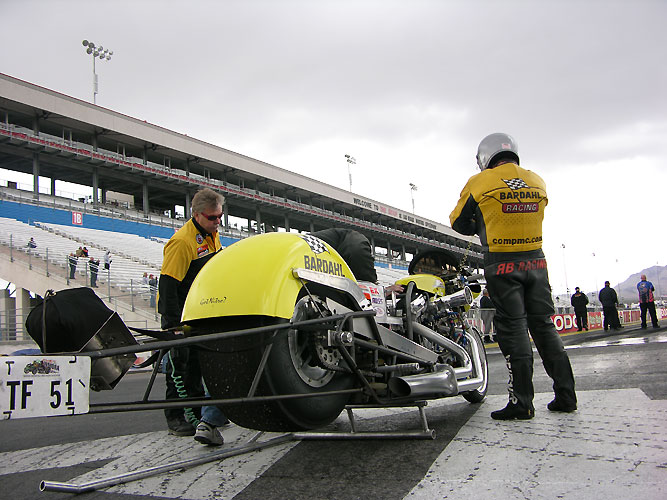 Up next, the bike is prepared for starting. Both Steves line up for the first round showdown. 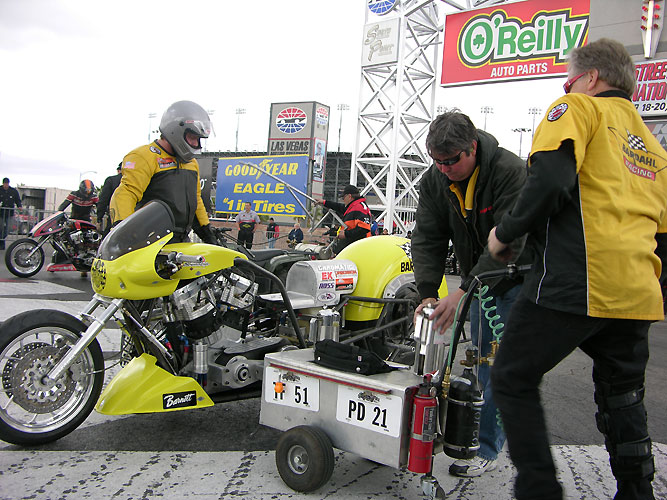 George will pass the methanol squirt can to Steve while Carl engages the remote starter cart. Once the bike starts it will be lowered off its jack and Steve will head for the burnout and staging. Steve Dorn had the choice of lanes so Steve ended up in the left lane which was not his first choice. 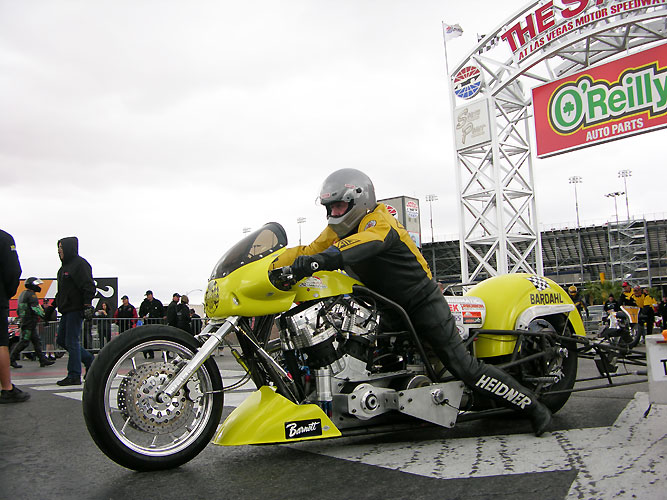 In the first round of eliminations Steve Heidner ran a 6.888 but Steve Dorn ran a 6.762, so Steve Dorn advanced to the next round and the Competition Motorcycles Top Fuel bike got "put on the trailer" in less than a blink of an eye. That's drag racing. The bike ran a best speed of 208 mph and a best ET of 6.888 and came home in one piece. That does it for 2011 and now it's time to  tear down and get ready for 2012. 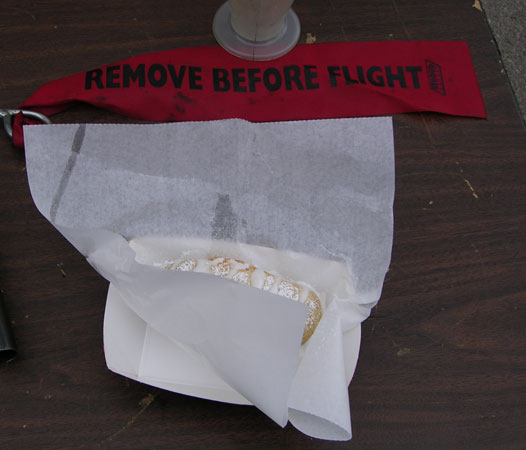 Here, partially concealed to protect young children, we have a deep fat fried Snickers candy bar. And you thought the biggest danger was going 208 mph on one wheel!

Money For Nuthin and Sex For Free

Here, behind the grandstands, the Top Fuel Harley rigs are lined up. Thousands of miles and hundreds of thousands of dollars all fueled by an addiction to Nitromethane and noise. As they say, Nitro is for racing and gasoline is for washing parts. Hey, if you spend $20,000.00 to get here, and $500,000.00 to get ready, you might win $4,000.00. Somehow it must be worth it. What else explains the migration. Perhaps DNA is altered early in one's life. Perhaps it's a plot...the altering of chromosomes in Nitro fumes and cleaning fluids. 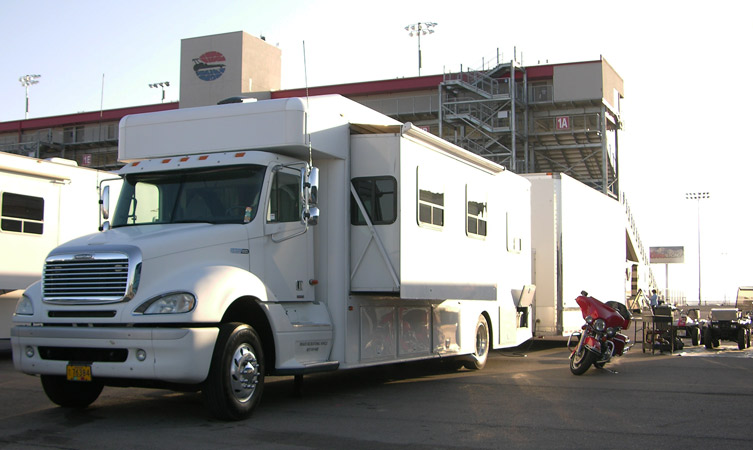 Like transformers these rigs turn into living quarters, complete with satellite dishes, microwaves, showers and for all we know hot tubs. 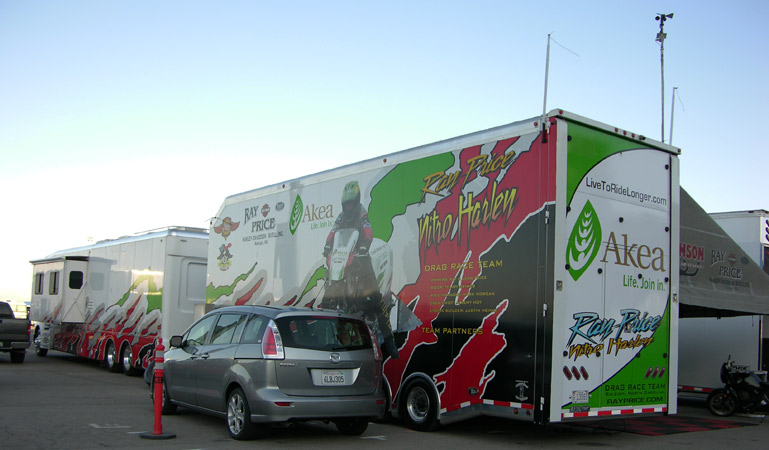 Ray Price's rig sports its own meterological station. In case you haven't figured this out yet the Motor Company isn't racing, but dealers like Ray Price carry the torch. Dick O'Brien is long gone. "GrandDaddy" Joe Smith comes out to spectate and survey the nitro scene as he did in 2010. When we were at Bonneville in 2011 and got our 200 mph record with Mike Geokan's Bonneville Bullett drag racing legend Pete Hill (Supercharged Knucklehead) stopped by our pits.

The legends of Top Fuel Harley Drag racing like Pete Hill and Joe Smith came at a time long before the stacker transporters were on the scene. Their record of successes like Pete Hill's five championships are not likely to be repeated...at best they got a few sponsored parts and had to make everything else and travel on their own nickel. People like drag racing pioneer Russ Collins was a good friend of ours...There are only a few pioneers and those days cannot be replicated. Nothing is based on stock parts anymore. No CB750, Knucklehead, Panhead, Shovelhead, or Evo engine cases. It's billet everything these days. 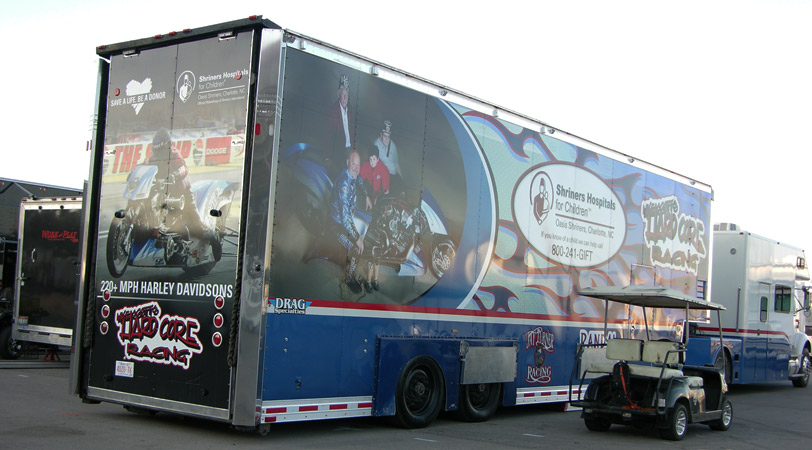 There were about 400 rigs like these at the races in Las Vegas, some much more elaborate, at this NHRA Division Finals. When you haul your racecar it makes sense to take your shop, your house, and your telecommunications with you. Sort of puts an end to washing engine parts in the motel bathtub.

Warren Buffet's Berkshire Hathaway's See's Candies seems to have sponsored a race team. Warren looks at the bottom line not the finish line. Is he paying attention to this? No, like we said, he's a bottom line guy who plays bridge with Bill Gates. 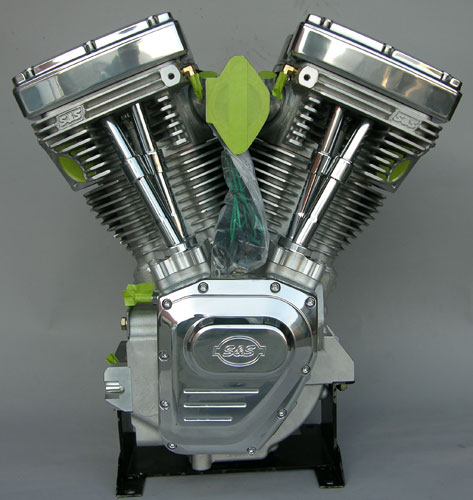 Carl Pelletier brought our 126" Orca Turbo Motor out to Las Vegas for us to take back to Los Angeles. We gathered up the special internal turbo parts and the unassembled engine and carted it up to Boise on our last trip to Bonneville. Based on our Bonneville experience with the 139" Orca motor we finalized the internal modifications, piston design, and cam specifications for the 126. Carl did the final machining, welding, cylinder head and valve preparation to give us a stable 300+ horsepower engine. Lots of tricks learned at Bonneville.

Carl loves building engines which he has done for nearly 30 years and decided to close down his accessory, street bike service, and tuning business and concentrate on his busy race engine business. Stocking tens of thousands of dollars of chrome do-dads and endless customer questions about this v. that accessory just wasn't as interesting or rewarding as machining and working on high dollar engines....Top Fuel, Pro Dragster, Turbo and ultra high hp street motors.

Carl can be reached via e-mail which is less a disturbance for him in his busy engine building business. He works by appointment in his new dedicated engine building facility. If you're ready to build a race engine he'll walk you through the details and costs. Just engine building. No chrome master cylinder covers.