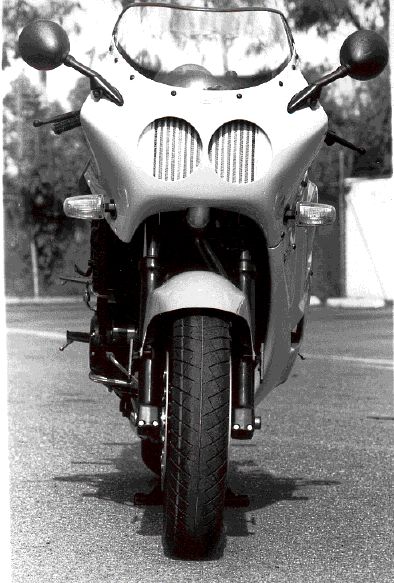 Thinking about Honda's seven mile banked oval test track we mounted a large capacity intercooler in the Triumph 1200 Daytona's nose. Only the headlamp assembly was removed, but it did take some creative heliarcing to construct the intercooler. A 2" diameter connector pipe can be seen coming up from the turbo to the center of the intercooler base. The discharge tubes from the intercooler were 1 3/4" in diameter and exited in a right and left fashion, blowing directly into the ends of the inlet plenum to prevent "directional" differences in cylinder to cylinder airflow. This resulted in maximum charge air cooling but greatly lengthened the inlet system. We left off our special inlet breather valve assembly as the bike was set up for top end only. Even under 25psi of boost you could grab the connector pipes and they were cool to the touch. If you let the bike sit around after a run they would eventually heat soak, so we chilled the intercooler with ice and wrapped the gas tank and connector pipe in wet towels between runs. A heavy wire mesh grill was added to cover the headlight holes which partially aided the airflow around the bulbous nose. Turn signals and all external objects like mirrors were removed for top speed runs. External headlamps were added for nightime street useage.The Daytona 1200 is actually quite aerodynamic and less prone to "wander" than is a ZX-11 at speeds far exceding 200mph. Riders who rode the bike past 200mph likened it to being as comfortable and stable as a big Mercedes flat out on the Autobahn. The bike is big, heavy and stable which is pefect for the power it was making (400+).