A BLANK SHEET OF PAPER..Ancient History

When the K100 was first introduced it was quite a sensation in that it wasn't a Kawasaki Z-1 nor a Honda Goldwing...It was as if someone had taken a BMW 2002tii, laid the engine on its side and chopped off two wheels. We got one of the first ones in the country and immediately set about dissecting it and figuring out how to turbocharge it. Of course we had to ride the thing first and it was as solid as a bank vault and about as exciting as watching grass grow. It needed extra power in a big, big, way. 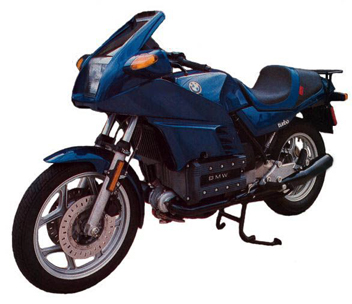 With a blank sheet of paper facing us we decided to set a new standard and do things right. The first thing we decided to do was incorporate a 250 hp air to air intercooler. Every 11 deg F rise in inlet temperature causes about a 1% power loss. Our distributor didn't see the need for the expense. Check out our Intercooler Calculator to see what happens when you compress air. The second thing we decided to do was put a small highly advanced 180hp IHI Turbo essentially under the bike where the heat would not intefere with the rider's comfort, nor would it boil the gas in the gas tank. The third thing on our list was design a positive oil scavenge system to make sure the turbo would "drain" under all conditions. No one had ever done an intercooled, fuel injected, motorcycle before and there never had been a turbo that was sophisticated enough to be used on a daily basis. Up until this time turbos were crude draw though carbureted units that cooked your leg, fouled spark plugs, took forever to warm up, ate pistons, blew head gaskets, and only went fast in a staight line in a semi-controllable fashion. 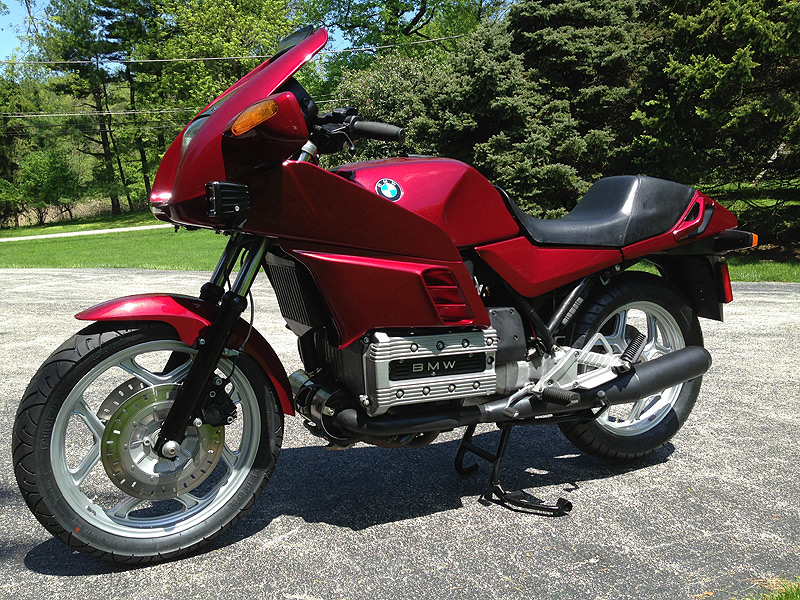 BMW built a tough bike. The first K100's we built had a one-piece intercooler placed in front of the radiator. After about 20 kits were made we found out from a customer in Texas that in the Summer heat the bike would run hot so we split the intercooler core allowing air a direct path to the radiator...bye bye overheating. The initial kits were designed to run 5 psi of boost with the stock injectors which were rated at about 12.5 lbs/hr at 36 psi. No one had ever "blown though" the L-Jetronic flapper valve mass sensor before but it worked just fine. At 5 psi the bike required no modifications at all and was fast enough to embarass a lot of bikes. The stock injectors would cover the 90 real rear wheel horsepower just fine, thank you. Not many bikes had 90 rear wheel horsepower. Check out our fuel injector calculators. 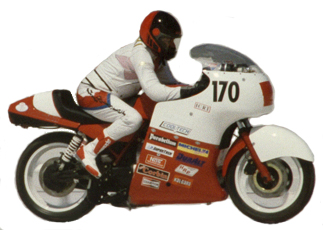 Imperfect knowledge gives less than satisfactory results. We designed the kits for 5 psi and total reliability. The injectors would not support more than 90 hp and the fuel pressure regulator was not referenced to manifold pressure so it did not "track" boost pressure.

Our distributor brought us a rising rate fuel pressure regulator from Ak Miller/Cartech with the idea of running higher boost and asked us to copy it...we declined as it was a stupid idea in the first place and secondly it would be doubly stupid to waste our time making stupid things, money or nor money. Our distributor persisted with these regulators, finding someone to make poor copies of the Cartech unit. These units have about eight square inches of diaphram area which means they exponentially increase the fuel pressure as the boost pressure rises. As the pressure increases there is no hope it will exactly track your motor's needs. On it's plotted curve it will only be "correct" at one intersect. Above and below this point it cannot be "correct". Our distributor resorted to aquarium valves to "bleed off" boost pressure going to the diaphram in an attempt to adjust things that were already out of control. Use of this set up for higher boost levels resulted in damaged motors during some speed attempts.

The above picture is from 1989 Bonneville Speed Week where the bike went 199.394 mph with 130 lbs of fuel pressure, aquarium valves and in the end a damaged motor. The turbo was capable of 180hp and the injectors were only good for 90 hp and no amount of trickery was going to overcome these facts. Bike was damaged. The bike was damaged multiple times with an effort to resleeve it. Never set any recored under Luftmeister tuning/control.

Beyond stupid. We told Matt if the general public ever found out his failures it would screw up thing businesswise.

Enough was enough, so we instituted our "5th Injector" program calibrating it for the IHI's airflow at 8 psi which was 125 rear wheel horsepower. We tied the extra injector into the plastic inlet plenum with a specially machined billet enclosure that was designed to enhance the spray pattern under boost. This worked spectacularly well but once again the idiots tried to ruin a good thing by trying to run "bigger" injectors and even more boost. We tried to explain this would not work as it would dump too much fuel at the lower boost levels, but the idiots were off and running again with a new toy.

To control the fuel properly we designed a microprocessor based manifold pressure system to supplement the oem Bosch fuel injection. This was the first RSR AIC400 unit and could be used to control one to four injectors. With the RSR AIC400 we could program one large injector or up to four new injectors in a new plenum chamber (a total of 8 injectors). 2K worth of data entries. This led to the marketing of a  few "Eight Injector Kits". It also led to more dumb moves as our distributor attempted to "copy" our injector controller by conning some ex- MSD employee (he was fired) into building "microfuelers". Of course they did not tell us about this until they started having a 100% failure rate with their "microfuelers". We were asked to provide more AIC's to replace failed ones but they would not produce the failed ones...They were not ours.

As a final point in this madness we finally put one of our RSR 800i Fuel Injection Systems on the Luftmeister K100 race bike thay had never done shit and went 206mph at El Mirage. Matt had totally fucked up the K100 with things like aluminum wiring etc. so we insisted the bike be stripped to ground zero and we would do all the wiring and build a new turbo...5 days of which were bfabricating a big tube stainless keader for a larger 312 HP RHB6 Turbo...Plus a nose mounted intercooler...30 days work three employees.

When we showed up Friday before the next day departure to El Mirage we had instructed Matt Capri to put unleaded pump gas in the bike. When we went to check our RSR predictive programming the bike showed lean..but adding fuel with our RSR EFI still showed lean but it was obviously too rich. Matt had put ELF race gas in the bike with high lead content which fouled the O2 Sensor. We drained the gas tank, went back to our shop for a new O2 Sensor and put two gallons of unleaded premium in the gas tank. Instantly the bike responded. Matt went into his office and we rolled the bike into the alley and blew two red lights at 120 mph in Long Beach and then told Matt to load it up. 1st Pass El Mirage 206 MPH.

Since we weren't paid for it we immediately removed the electronics and that was the end of that bike's career. That bike had a bigger 312hp turbo and a much larger nose-mounted intercooler, forged pistons, race gas, an MSD ignition and longer rods. It also had a very special stainless steel turbo 4 into 1 header that took us five very difficult days to build and a cool can for the fuel...all for the cause as they say.

We could tell you a dozen dumb ass stories about this, but this is why we are putting out this information...So we don't have to do it time and time again on the telephone or in person when you stop by to visit.

Earlier AIC units were not adjustable, featuring one fixed fuel map. The production RSR AIC400 units came in a billet hard anodized enclosure that had four fuel maps and a +/- 10% trim knob. 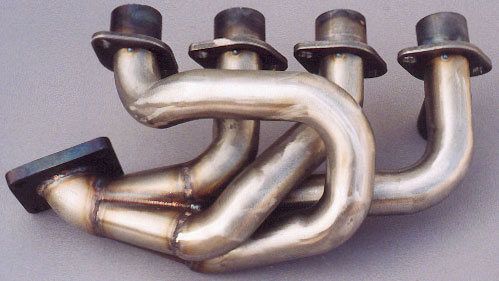 Production K100 Header: No one ever really saw one of these as they do their duty in obscurity, tucked beneath your cam cover, subject to all sorts of thermal and road-related abuse. For those of you amused by statistics and self-inflicted pain, we offer the following: 37 separate pieces of stainless steel tig welded; one used up $80.00 bi-metal saw blade; over $40.00 in destroyed abrasive belts; $60.00 of Argon in two separate cylinders vented back to our atmosphere; twelve hours of labor/wages. You figure out what it's worth.

These things will whip your ass if you get lazy....Stainless is not forgiving. Those of you in the fab business know what we mean by that. Hey, you gotta do what you gotta do! All seams removed.

The race SS Header had larger tubes and a bigger turbo. 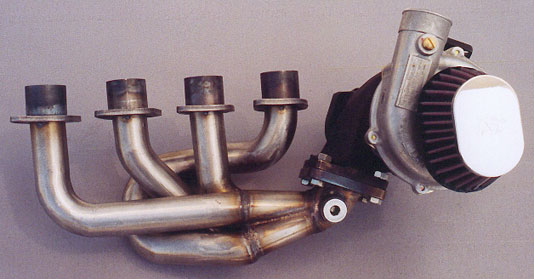 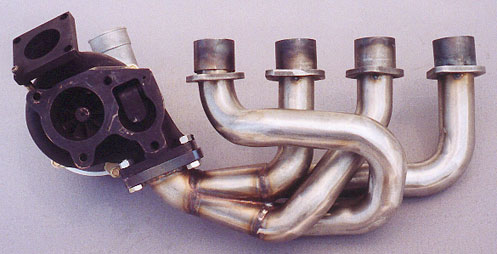 At the collection point there was an Oxygen sensor port for our RSR Air Fuel Ratio Gauge. A K&N Air Filter clamps directly to the turbo. Earlier versions had a very expensive can to trap water, a duckbill drain valve, and a filter inside. The turbo has a copper gasket between the 4 into 1 turbo manifold and the turbo itself. It will never leak or blow out. 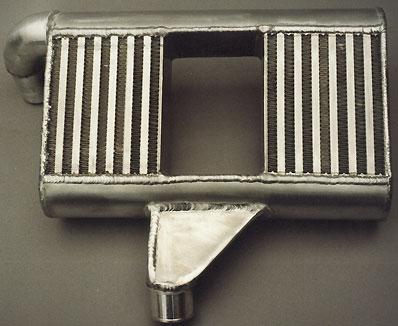 Center air passage allowed the incoming air a direct shot over the fender to the bike's radiator. All seams were triple-welded using three passes of the tig...first to insure clean base metal is deposited on the vacuum brazed core...then a second pass to join the separate pieces...then a final, cosmetic pass. All parts were pressure tested. Earliest versions did not have the split feature. 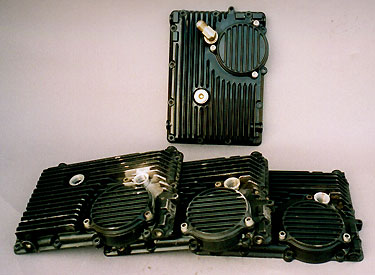 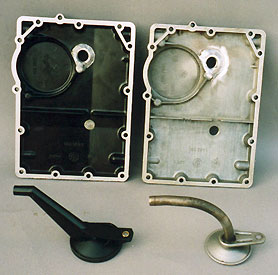 For the K100s customers sent in their oil pans for oil scavenge modifications featuring O-ring boss AN8 fittings for AN8 stainless steel braided lines. Positive oil scavenging "dry-sumps" your turbo, leaving no residual oil in the drain line. No matter what the circumstances i.e. shut-off, heavy braking, full boost acceleration or high G cornering loads, the turbo will drain properly.

There won't be any tell-tale blue smoke foretelling of turbo bearing demise or "coking" of the oil resulting in spun exhaust shaft seals. The two pans on the right were born 17 years apart...the black one from a 2002 K1200RS and the other from a 1985 K100RS. No one else ever figured out how we did this.