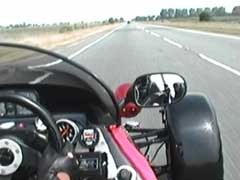 Come along with Mark Hobbs as he takes his Grinnall K1200RS Turbo out on a short drive on a sunny day. Put yourself in his seat and watch the terrain speed by and hear the engine accelerate with 275 hp and 16 pounds of boost. It's a long road from concept to completion and not all have the fortitude to go the distance when confronted with slew of new technologies to master. Like the ballerina with battered feet starring in Swan Lake, join Mark and enjoy the moment at center stage...asphalt ribbons and one bad-ass Grinnall. 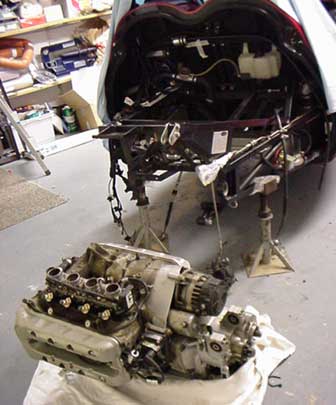 Out comes the stock K1200RS engine to prepare it for turbocharging. RB Racing forged 9.5:1 pistons have to be installed and the wiring harness and Bosch Motronic ecu needed to be upgraded to K1200RS specs as the Grinnall had K1100 specifications grafted to the K1200RS engine. 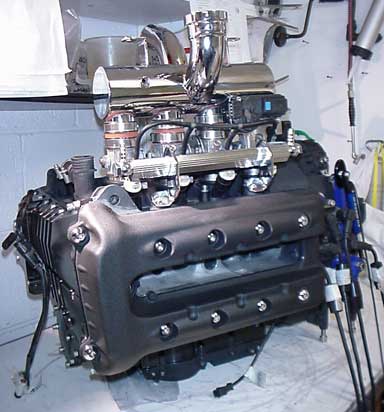 Special Grinnall inlet plenum that houses four additional injectors that squirt directly down internal velocity stacks (injectors not shown). One of the center tubes houses a special combination RB Racing Inlet Breather/Pressure Relief Valve. Stock injectors are pictured in the photo but these are replaced by larger units. With primary and secondary injectors the system is either calibrated for 350hp (3 bar) or 275hp (2 bar). The plenum is fed by a 350hp rated intercooler from RB Racing. All intercooler fabrication and plumbing specific to the Grinnall was handled superbly by Mark Hobbs. 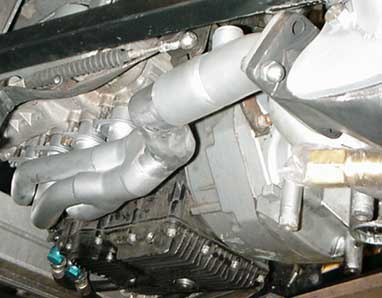 There is a 50mm offset compared to the K1200RS road bike turbo location due to the large automotive car tire employed. Here the new location is being figured out prior to the fabrication of supports for the turbo itself. The ceramic coated 4-2-1 header uses slip joints and only acts as a tuned conduit for the exhaust and is not meant to support the turbo. The turbo is mounted below the sump level, so a special scavenge system is employed to effectively "dry-sump" the turbo.

Fabrication of the Charge Cooler 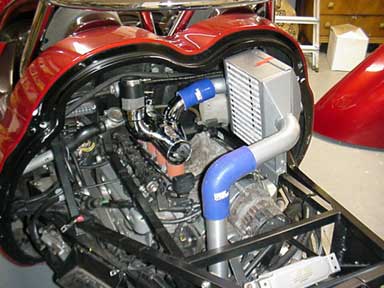 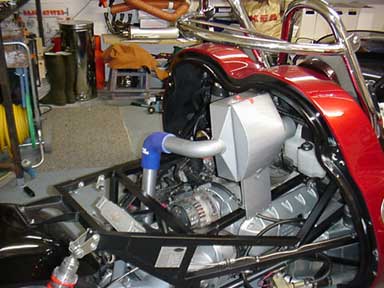 RB Racing supplied Mark with a 03-1024 intercooler core. Air had to be ducted from the outside which Mark handled with a custom fabricated carbon fiber scoop. Sparco silicone turbo hose connections were used to complete the installation.

Putting it all together 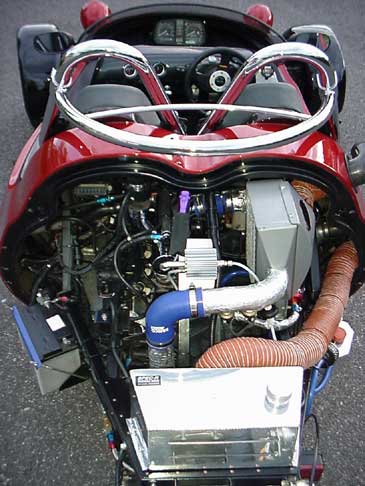 Center of the picture is the Aquamist water injection system. Based on our long involvement with the Bonneville Salt Flats we know that a 50/50 mix of methanol and water will do more to save an engine that anything at the higher pressure ratios. Mark worked with Richard, the technical director of ERL (manufacturer of the Aquamist system) to set up a water injection on the Grinnall. With the larger RC Racing injectors to replace the oem units along with RB Racing's RSR AIC400 Additional Injector Controller and the forged pistons, the Grinnall K1200RS Turbo is a reliable powerplant. 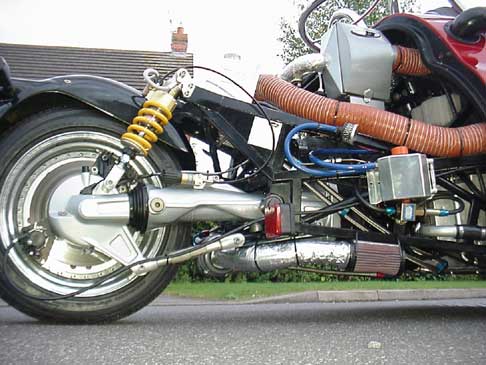 Just visible in the upper right hand corner of the picture is the carbon fiber inlet scoop for the charge cooler. The aluminum can that Mark fabricated is a catch can for the engine's breather system. An Ohlins shock absorber endeavors to keep the rear wheel attached to the road. 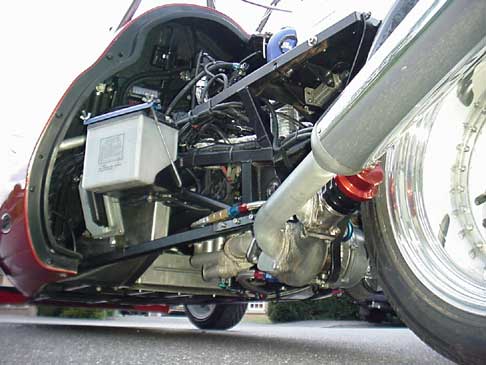 The RB Racing BoostMaster wastegate opens directly into the muffler section. Oil feed and scavenge lines from Earl's are visible.

You can't see all of the handiwork when the Grinnall is buttoned up...In fact there is little to tell you that this is a 3 second 0 to 60 mph missle when all is hidden away. 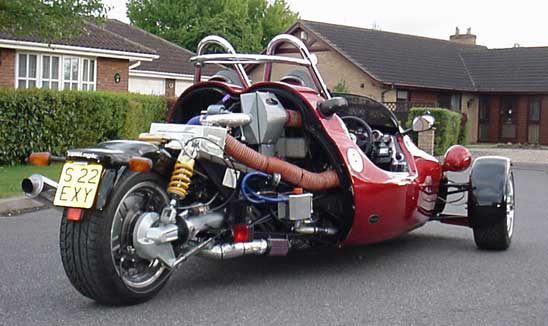 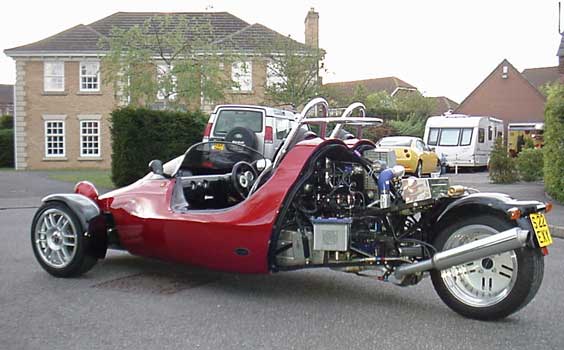 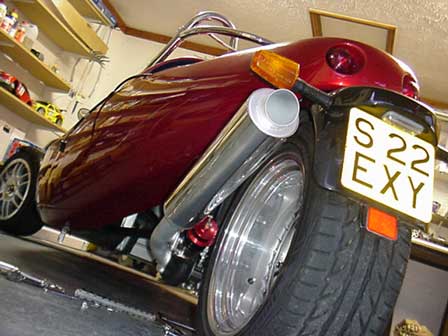 "Why my good man...it's a muffler bearing...and they're hard to find these days!" Never give away your game.

Cockpit of a Porsche Eater 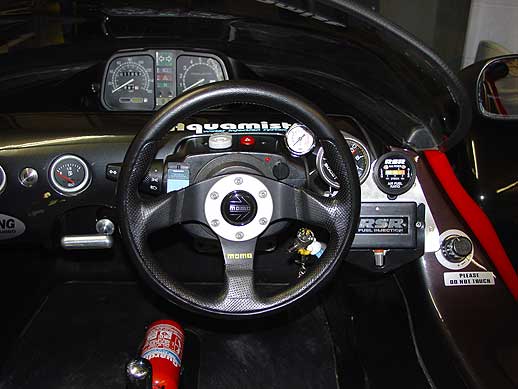 Visible are the basic gauges and controls you need: Tachometer, RSR Air Fuel Ratio Gauge, RSR AIC400 Additional Injector Controller (4 map select and +/- 10% trim), Boost Gauge, Dial-A-Boost, Aquamist Water Injection flow meter, oil pressure gauge and of course the speedometer. All important data when you're hitting 100 mph in under ten seconds and speeding along at 135mph with your behind inches off the pavement. Watch the video. Enjoy the ride. Remember the work it took to get there.