The first "new" Triumph to go over 200 mph was turbocharged and fuel injected by RB Racing. It was designed with a custom 800cfm turbo and an RSR 800i 8 injector fuel system targeted at 500 hp. Our distributor trucked this bike off to Daytona to show it after an initial "open house" come see the beast a few months earlier. The day before a scheduled test by Sport Rider we were called to be told the bike was not producing any boost...a quick test confirmed that something was amiss. Our distributor demanded that we take off the 800cfm turbo and re-engineer a 440cfm IHI turbo into the kit, similar to the ones we already held numerous speed records on BMWs, Suzukis, and Harley-Davidsons. 18 hours of hard work involving machining, welding and custom fixture design we grafted the RHB6 into the exact spot the previous large 800cfm unit had occupied. The bike still did not produce appreciable boost but it went to Sport Rider anyway. Using our Autocal software we custom wrote a new program for the smaller turbo in a few minutes. The magazine thought the fuel injection worked perfectly and also accurately reported the bike had severe lag due to some undiagnosed problem. Our distributor told Nick Ienatsch our muffler had killed the power. It should have gone 240 mph instead of 202.713 mph but as it turned out our incredibly stupid distributor had ripped 3 of the 4 inlet rubber boots while trying to install different pistons and head gaskets. In addition our distributor had five months to get a lock-up clutch but did nothing, so the clutch was totally fried. We spent hours on the phone with Sport Rider and wrote numerous letters trying to set the record straight. Still, over 200 mph with 3 inlet manifolds crying like ruptured ducks isn't too bad. Over 100 hp worth of air returning to whence it came.

Big Turbo Back in Place

Once the boots were replaced a few weeks later, and the 800cfm turbo reinstalled the bike was deemed "too powerful" hitting almost 180mph on the front straight at Willow Springs Raceway with 8 to 10 psi of boost. The bike ran two or three Reg Pridmore Class riding schools, working perfectly the entire time, running tankful after tankful of gas without incident. A video was made which demonstrated both the power, and civility of both the turbo and the injection systems as well as its blinding speed.Turning the boost up to 25 psi at El Mirage had the bike running 197 mph, with the rear tire going nearly 240mph...result, one completely shredded Metzeler grooved rain slick, and an aborted run albeit over 190 mph! The bike went on to set eight fastest bike of the meet awards, going 199mph even though it was severely hampered by an air cleaner that our distributor refused to remove and replace with a special ram air system we had spent two days building. Running 400hp through a small K&N filter is insane. There is no limit to some peoples stupidity.

Why was the Intercooler in the nose? Click on photo to enlarge

We set the original Triumph Daytona 1200 4 cylinder up only to run extreme top end speeds (at the Honda seven mile oval) with a very long inlet tract and a nose mounted intercooler.Cooling the 300 degree Fahrenheit turbo discharge temperatures was our primary concern. Producing over 400 hp with an 800 CFM turbo and a decent lock up clutch, 240 mph was well within reach. Coulda--Woulda--Shoulda. SHIT! Some people have copied this front mounted intercooler concept on a few water buffalo GSXR's but they don't know why we did it that way in the first place. Now they do.

And me without my woman: Click on photo to enlarge 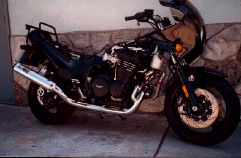 We never got paid for the yellow one, although our distributor, Matt Capri, managed to sell the turbo kit twice. At a jury trial by the person who ordered the Daytona Turbo Kit , who paid in excess of $25,000.00, our former distributor claimed the bike did not work as a defense for non-delivery even though they actively promoted the Triumph turbo as one of their major accomplishments. The customer won some small award (less than his legal costs)...then promptly tried to sue us, we assume to pay his legal bills. There is no justice. Alice in Wonderland..down is up and up is down. The grand art of self delusion The yellow bike was sold with the turbo kit installed for $10,000.00 to a friendly customer, Michael Emmings, to shed our distributor of the flooring charges that had mounted up as the bike had never been sold or titled Ergo, we lost control and never got the kit back nor the money. Matt bled Michael dry then split.

Being gluttons for punishment, it seemed logical to double down and really muck up things. The result is the newer design seen on the black 1200 Daytona. The inlet path has been shortened dramatically and a few other radical things have been added. The large spine backbone makes it a little difficult to route things under the gas tank, but we did manage to get a short, efficient path from the turbo to the intercooler to the inlet plenum. The fuel control system is the same that we use on the ZX-11s; two computers: an AIC400 for 0"Hg to 30psi (3 BAR) and the RSR Fuel Injection with 42mm throttle bodies running things from 15"Hg to 0"Hg (1/2 BAR).

We never raced this one as the customer ran out of funds and we stopped work. It's funny how you never get paid for your work because people lose their jobs or overspend their budget....but they can always find an attorney to try to force you to work for free. We don't work for free...PERIOD! 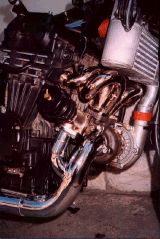 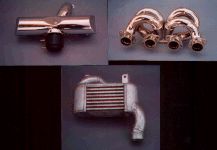 If you are looking for a really weird 1200 Daytona Turbo Kit that thinks its a F-15 fighter plane we wish you a lot of luck because we're done with the Triumphs. We spent our time in hell not getting paid for months of work and dealing with a couple of first class loonies. You can't chalk it up to experience because the chalk would undoubtedly screech on the blackboard. Best to slip away and look at what was done and never revisit it again.

For those of you determined to do this you'd better check your oem ignition timing. We spent over $1,500.00 on a custom ignition for this one that we never got paid for. Take a look at the parts on the two bikes. Calculate the man hours or work, the parts, and the finishing costs, not to mention the fixtures and production details.....then do it for free. Once you've done this, give us a call and we'll have a good laugh together in the looney bin. 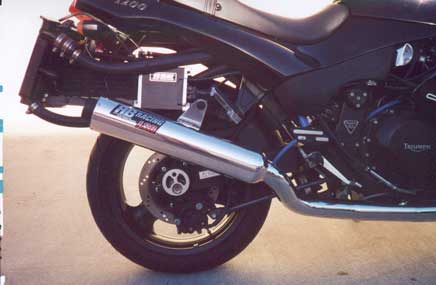 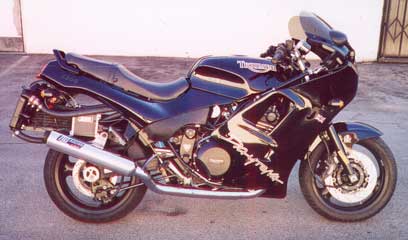 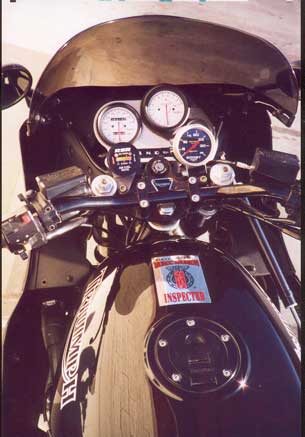 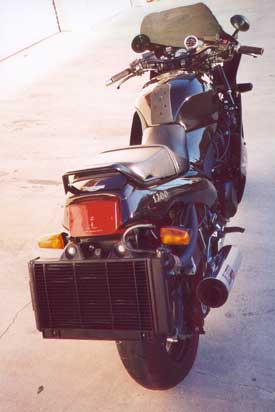 Gauges, Intercooler and rider to the front...Radiator and Oil Cooler to the rear...Cold air in Hot air out. Radical.

If you have seen this Triumph 3 cylinder turbo set up give us a call. We made it for a motorcycle show display for our distributor and never got it back. It was prototyped on a Speed Triple and never was run by us...maybe you've seen it on a bike and can solve the mystery for us. More wasted days and wasted nights. Nevermore.